The high voltage clash between Uruguay and France would be one of the exciting match of Fifa World Cup 2018. Both the team are in top gear, Uruguay beat Portugal and France beat Argentina, that’s mean we shall see the Champion match tonight. 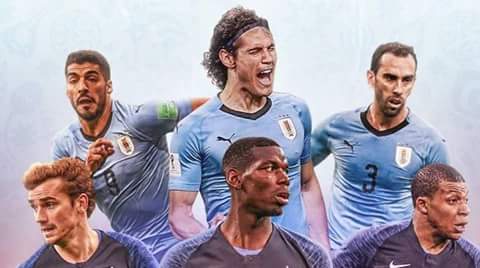 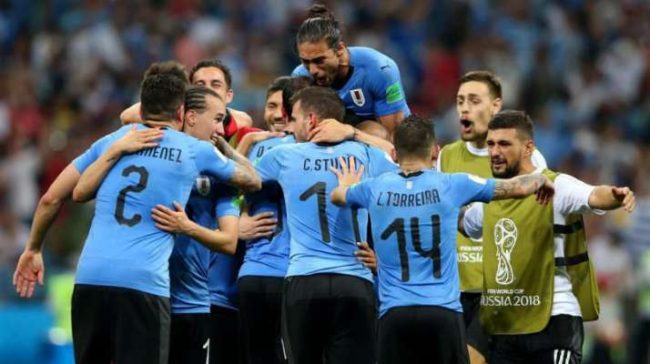 Definitely, Uruguay looking strongest side in this Group with the Star players Luis Suarez, Edinson Cavani, this duo can be envy to any rival, Cavani was the top scorer in qualification draws tournaments, he scored 10 goals and beat Neymar in the term of goal scoring, who is transfer to Paris Saint Germain on record price of €400 million, while Uruguay have another star footballer Diego Godin, he will play a major role in defence of Uruguay, his skills and strong defending, will surely make the difference in scorecard, where he will not want to give the chance to his goalkeeper to conceding a goal.

WORLD CUP JOURNEY SO FAR
Uruguay started thier World Cup, against Egypt with victory by 1-0, In the second match they faced Saudi Arabia, Here they grabbed another victory by 1-0 on scoreline. Last Match in the group stage they had clash with host Russia here they finished inside style set 3-0 on scoreline.
Uruguay face off with Portugal in Round of 16, Here in the pressure game, they showed their’s cool and composer game got remarkable victory by 2-1.

TRUMP CARDS:
LUIS SUAREZ:
Undoubtedly, one of the best striker in the World, World knows his capability, he is a kind of player who can make the pace into his team favour, rather If he does not get a red card for his famous Bitting.

EDINSON CAVANI:
The reliable name for Uruguay, he makes Suarez works easy. The fast runner and good tactics of the game make him the proper striker, he has to lead the team in Russia.

Les Bleus, France looking Fan favourite to Win the Fifa World Cup 2018 Russia, They came in Russia as the runner-up of Euro 2016, now this they showing that, they don’t want lest the Champion title.

France came on Round of 16 with grace, they best Austria in their first Match, and admitted why they calling contender of this World Cup. In the second Match, which against Peru they set another victory and confirmed their ticket of knock out, apparently, France struggled in their’s last group match which was against Denmark, this match was ended on draw, although they finished at the top spot in their group.
France played round of 16 match against Argentina, where they made come back after 1-2 on scoreline, what was the second half for France, Here magnifying game set glory and they end the Match on 4-3 on scoreline.
SQUAD
France, simply one of strongest contender fo lift the trophy this time, they have such a giant squad which can swallow a tidy team easily.

The Player of the tournament and the Golden Boot winner of European Championships 2016, want not to get barely these awards even give World Cup to his Nation, and he has the ability to do. He is come in World’s best forward player list, proven it numerous times, he is a big game player, his best comes in pressure games what makes him the incredible Striker.

Related:  Sweden vs Switzerland, who will go in quarter finals, Will Sweden? here's why

Uruguay conceded only 1 goal throughout the tournament, which means they are excellent in defending rather France netted 7 goals, So here we shall see the best clash, but Cavani and Suarez hope for Uruguay, they can test France defence slightly. Here Mabappe and Grezimann will gonna x factor for France. FIFA WORLD CUP TIMES verdict France set glory by 2-1 on scoreline, whether match will goes on penalties shoot out, France will be winning team.

Maradona: France vs Belgium match will decide the next Champion of FIFA! Know why

France vs Argentina: Final before Final, Argentina gear up but France would be tough

Sweden vs Switzerland, who will go in quarter finals, Will Sweden?...